‘Medical miracle’ – this is how the world media ranging from BBC to Al Jazeera described the pioneering surgery involving the reconstruction of a severed spinal cord, which had been carried out in Wrocław. Now, the Dr. Paweł Tabakow is doing more research to turn this miracle into a medical standard.

THE FEAT accomplished by Dr. Paweł Tabakow and his team from the Neurosurgery Clinic at the University Clinical Hospital in Wrocław and the Institute of Immunology and Experimental Therapy of the Polish Academy of Sciences in Wrocław went down in the annals of medical history. A male patient was lying on the operating table. He was paralysed from his waist down as a result of a knife attack, which had cut through his spinal cord. Dr. Tabakow opened the patient’s skull and removed a part of his brain tissue called the olfactory bulb. Twelve days later, the patient underwent a second operation. The doctor opened the spine and transplanted glial cells and fibroblasts grown in culture from the brain tissue into the damaged area of the spinal cord. He bridged the gap in the cord with nerve grafts taken from the skin of the patient’s calf. The spinal cord partly regenerated and the man could walk on his own again. This is the only such case in the world.

The pioneering surgery was possible thanks to the cooperation of physicians and researchers from Poland and the UK. Scientists from the University College of London led by Prof. Geoffrey Raisman had carried out similar experiments on animals. Based on their work, the team from the University Clinical Hospital in Wrocław developed an original therapeutic method of regenerating the humanspinal cord. The method could give people suffering from paralysis a chance to make a complete recovery. Yet before such surgeries can become standard, the effectiveness of the new technique has to be confirmed. This is the objective of the ‘Wrocław Walk Again’ project. The project is funded by the Nicholls Spinal Injury Foundation.

What happened during the first stage of the project?

PAWEŁ TABAKOW: The project was registered on clinicaltrials.gov – an experimental studies website. The European Medical Agency granted us the right to culture olfactory glial cells. We are about to conclude the certification process for a cell culture laboratory which will enable us to use technologically advanced tissue-engineered products in humans. This certificate demonstrates the excellencen of our university. It has already opened up entirely new research horizons for us and the university is receiving next project proposals.

But most importantly, we have combed the entire globe and found the one perfect patient among 500 candidates. He has undergone preoperativen physiotherapy and is waiting for the surgery to reconnect his spinal cord. We are still looking for the second patient.

Have you found only one?

We are looking for a person, whose spinal cord was cut through with a sharp-edged tool, e.g. a knife or a scythe. This type of injury is rare. We have chosen it in order to obtain unambiguous proof that the method works. We want to end the speculations of doubters who claim that it was the uninjured fibres in the cord that caused a spontaneous improvement. ‘

Will the next surgery be the same as the first one?

It will be similar but not identical. We keep evolving.We began studies on the use of glial cells in spinal cord regeneration in 2002. At that time, we used to remove them from the nasal cavity. Then, we became the world’s first team to remove them from the olfactory bulb. Now, we intend to introduce certain modifications, e.g. we want to transplant cells suspended in the extracellular matrix and try the technique of minimally invasive microsurgery of the spinal cord.

When will the method developed in Wrocław spread to other hospitals?

Medicine needs replicability. ‘Wrocław Walk Again’ is supposed to prove the effectiveness of the method. The next step will involve several clinics around the world operating on a group of patients with various spinal cord injuries.

Which patients will ultimately qualify for such surgeries?

Those with the most severe cord injuries, where it was either damaged mechanically or not anatomically severed. It is estimated that three milion people suffer from such injuries worldwide. 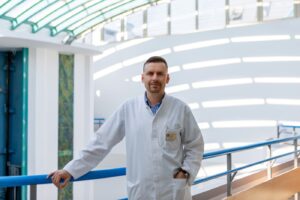 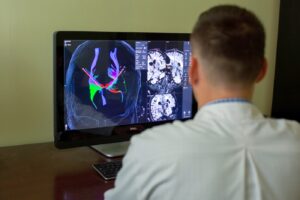 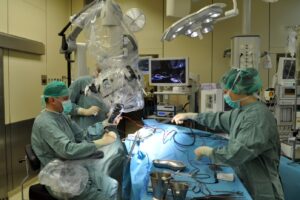