The Polish language belongs to the West-Slavic group of the Indo-European languages. Due to its structure it is classified as an inflectional, synthetic language. As a separate language, Polish began to take shape in the 10th century, playing an important role in the establishment and development of the Polish state. The earliest surviving records of single words in Polish date back to the 12th century. Until the 14th century, Polish existed only in regional and folk spoken varieties. A literary, supraregional variety of the language developed in the 15th and 16th centuries, as evidenced by the abundant Renaissance literature written in Polish. Initially, the development of the Polish language was strongly influenced by the languages of Poland’s neighbours: German, Czech, as well as Latin. In later centuries, the major influence of French was noticeable, and nowadays Polish, like other European languages, takes over a lot from English.

There are over 45 million Polish language users, and about 38 million of them live in Poland. Polish is spoken by numerous groups of Poles or people of Polish origin living outside Poland, including in the USA, the UK, Brazil, Canada, Australia, Germany, France, Ireland, Iceland, as well as Belarus, Kazakhstan, Lithuania and Ukraine.

The most comprehensive dictionaries of the Polish language include over 130,000 entries, and about 20,000 are in everyday use. More and more people are learning Polish as a foreign language. There are nearly 10,000 Polish learners worldwide; about one third of them study Polish at universities and in language schools in Poland. The learners are surprised to find words in Polish that they are familiar with in their own languages. For German it is, for example: roof, sheet metal, fair, edifice, town hall; for Italian: fountain, grace, tomato, windowsill; for French: luggage, ticket, bouquet, romance, visit; for British and American English: coach, computer, floppy disk, businessman, folder, mixer, dribbling, relax, ketchup, jeans. Each native speaker of these languages will easily recognize the subject matter of newspaper texts whose titles sound like this, for example: “Racjonalna polityka ekonomiczna”, “Katastrofalna inflacja – bank centralny interweniuje”, “Konferencja prasowa ministra finansów”, “Korupcja w lokalnej administracji”, “Nowy skandal dopingowy w tenisie” [“Rational economic policy”, “Catastrophic inflation – the central bank intervenes”, “Press conference of the finance minister”, “Corruption in local administration”, “A new doping scandal in tennis”]. And all this is in Polish!

A family tree of the Polish language 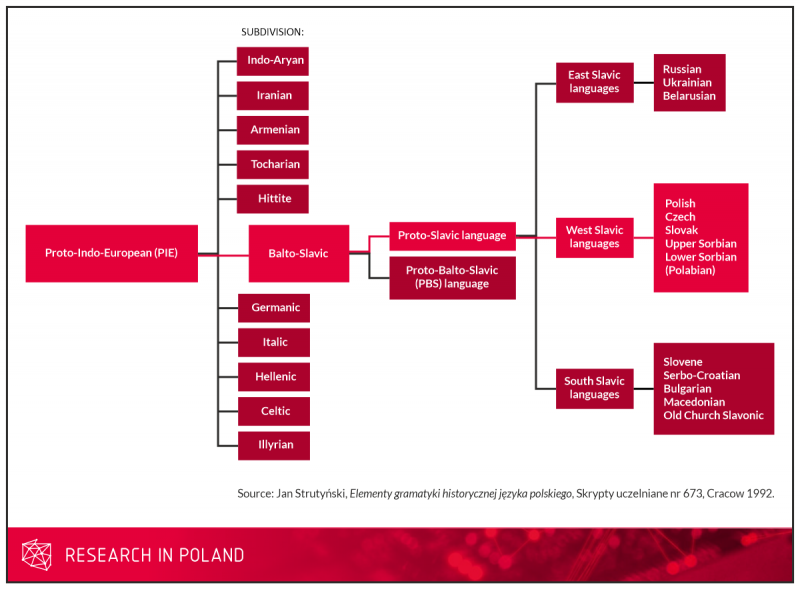 Certification of Polish as a foreign language

Since 2004, foreigners learning Polish have been able to take certificate examinations in Polish. Ever more candidates are interested in the exam each year. 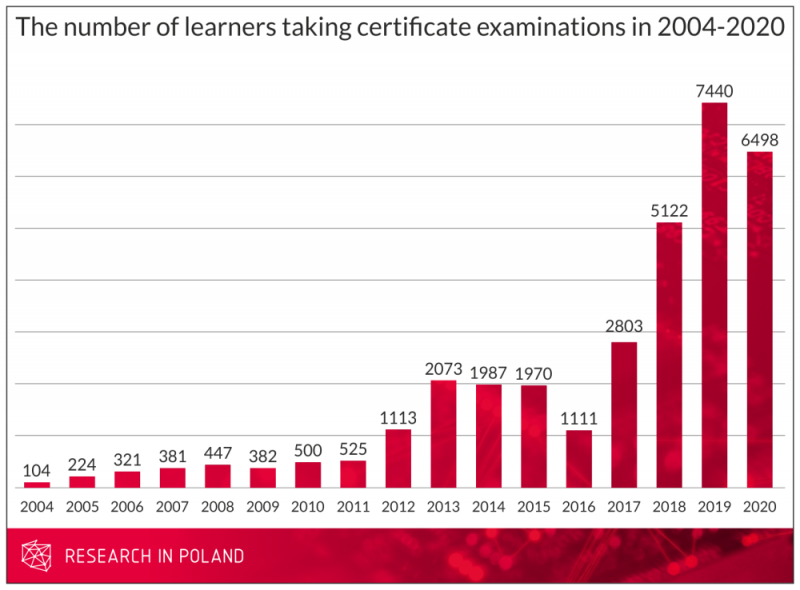 The certificate in Polish as a foreign language is the only state document confirming the knowledge of Polish language. People who would like to document their level of proficiency in Polish can take the exam. So far they have been mostly foreigners studying or working in Poland, but recently there have also been many people who want to certify their knowledge of Polish when applying for Polish citizenship. More and more often a language certificate is required from foreigners employed in Poland in the case of positions where they will be using the Polish language. This is the case, among others, in the health service (e.g. Nursing Chambers expect foreigners employed in Polish hospitals and outpatient clinics to prove their Polish language skills at B1 level) or in the civil service (a foreigner taking up a job in the civil service in Poland is expected to have a certificate of Polish language skills at B2 level). The interest in the exam is also growing among high school graduates in Germany, Belarus and the USA to name a few. The educational authorities of some countries consider the certificate in Polish as a foreign language to be a document entitling a student to additional points at the high school-leaving examination. The certificate is also obtained by foreign students studying in Poland or foreigners applying for a place at a Polish university. The certificate exempts those planning further studies in Poland from preparatory language courses before commencing their studies.

Depending on the type of studies, universities impose different requirements on foreigners concerning the knowledge of the Polish language. For artistic faculties and those that require physical fitness (studies in music, fine arts, physical education) knowledge of Polish at B1 level is required, while for other university courses it is usually required at the general high school level, i.e. B2.

Among those taking the certificate exam are employees of international corporations, civil servants, teachers, managers, employees of foreign banks and insurance companies. A positive result of the exam makes it easier for them to obtain a permanent work contract and settle down in Poland.

Important institutions involved in the study of Polish language and literature:

Many institutions and language schools in Poland offer Polish language courses with elements of Polish culture. They include semester, year-long as well as summer courses. Below you will find a list of academic centres that specialize in teaching Polish to foreigners:

The Center for Polish Language and Culture in the World, Jagiellonian University
http://www.polishstudies.uj.edu.pl

Centre of Polish Language and Culture for Foreigners “Polonicum”, University of Warsaw
www.polonicum.uw.edu.pl

The Centre of Polish Culture and Language For Foreigners, University of Warmia and Mazury in Olsztyn
http://www.uwm.edu.pl/okjp/

“POLONUS” Centre of Polish Culture and Language for Poles from Abroad and Foreigners, University of Rzeszów

The Polish Language and Culture Centre for Polish People from Abroad and Foreigners, The Maria Curie-Skłodowska University in Lublin
http://www.cjkp.umcs.lublin.pl/

The Chair of International Polish Studies, Department of Philology, University of Silesia in Katowice
http://www.studiapolskie.us.edu.pl

The International Centre of Education, Cracow University of Technology
http://www.mck.pk.edu.pl/

Polish Language Study Centre at the Institute of Polish and Cultural Studies, University of Opole
http://polonistyka.wfil.uni.opole.pl/kursy-jezyka-polskiego-dla-obcokrajowcow/

The Centre of Polish Language and Culture for Foreigners, Nicolaus Copernicus University in Toruń
https://www.umk.pl/uczelnia/dydaktyczne/skjpo/

School of Polish for Foreign Students, University of Lodz
http://sjpdc.uni.lodz.pl/

The School of Polish Language and Culture for Foreigners, University of Wrocław
www.sjpik.uni.wroc.pl

School of Polish Language and Culture, University of Silesia in Katowice
www.sjikp.us.edu.pl

One of the NAWA goals is to promote the Polish language outside the boarders of the Republic of Poland by promoting learning Polish as a foreign language, supporting activities aimed at the professionalisation of teaching and maintaining permanent contacts with academic centres and institutions involved in teaching Polish as well as raising the prestige of the Polish language as a foreign language,which is learned by almost 10,000 people all over the world.