The discovery of more than 80 extrasolar planets, one million variable stars and one of the largest objects in the Solar System – those are only some of the achievements of the astronomers from the Astronomical Observatory of the University of Warsaw over the course of 27 years of the major Polish observation project called the Optical Gravitational Lensing Experiment (OGLE). From its inception, OGLE has brought new world class scientific discoveries of an international standard and indicated new directions of research in modern astronomy.

The large-scale sky survey OGLE, one of the largest such projects worldwide, is led by Professor Andrzej Udalski. Observations are collected with the use of a photometric telescope with a diameter of 1.3 metres and a powerful 32-chip mosaic CCD camera, both located at the Las Campanas Observatory in Chile. It is one of the best observational locations on our planet.

‘We watch very large areas of the sky and analyse mostly fluctuations in the brightness of objects, which indicate that something interesting is happening there. At the moment, we are watching more than two billion stars, which makes it one of the largest data bases worldwide. In addition, we have been watching them non-stop for many years,’ explains Prof. Udalski.

The observations make it possible to analyse how the brightness of objects fluctuates over time. This is related to one of the major objectives of the project, that is searching for phenomena described as gravitational microlensing, first discovered by OGLE. ‘These are extremely rare phenomena. The light emitted by the source, that is another star in our Milky Way, is lensed by an object located between the source of light and the observers. This effect allows us to estimate the mass of the lens,’ says Prof. Udalski. Predicted already by Einstein, the phenomenon was introduced in modern physics by the outstanding Polish astrophysicist, Prof. Bogdan Paczyński, in the 1980s.

Search for Far and Near Objects

Microlensing has been used among others to study the dark matter in the Milky Way. Moreover, it has been applied to discover extrasolar planets – it is currently one of the basic tools used to detect them, as it enables finding very distant objects. The second fundamental method of detecting distant planetary systems is the transit method, likewise pioneered by the Polish astronomers from the OGLE project. These two methods have so far led to the discovery of more than 80 exoplanets in the OGLE project.

The OGLE astronomers have completed the longest catalogue of variable stars worldwide, with approximately one million objects. Furthermore, they regularly discover unique novae, dwarf novae or supernovae and study distant quasars. The OGLE team studies objects located closer to the Earth, as well. Among others, it has discovered one of the largest objects in our Solar System with a diameter of 470 kilometres, named Dziewanna (after the Slavic goddess of the wild nature, forests and the hunt).

International Cooperation is a Must

‘Our research involving gravitational microlensing requires international cooperation, because these events are unique and we are not able to provide round-the-clock observation on our own,’ explains Prof. Udalski. That is why the scientists share information with astronomers from countries such as the USA, Australia, New Zealand and Japan. The unique data bases of the OGLE project are open to astronomers all over the world, who are thus able to make new discoveries.

The OGLE team has published more than 550 research papers, including over a dozen in Nature and Science.

Astronomical Observatory of the University of Warsaw 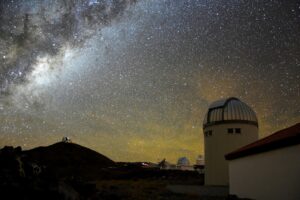 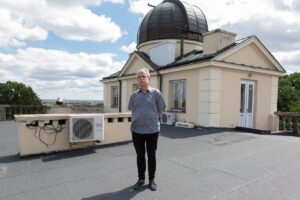 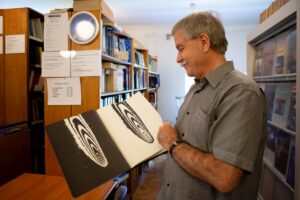