Gdańsk Shakespeare Theatre: The Bard in Classic and Avant-garde Style

Gdańsk takes an important place on the world map of Shakespearean centres. The city owes this significance to Professor Jerzy Limon from the Faculty of Languages of the University of Gdańsk.

PROFESSOR JERZY LIMON is an Anglicist, theatre historian, translator of English literature, writer, specialist in theatre studies and outstanding expert on William Shakespeare and his era. He has published a number of books and several dozen articles on theatre, including the English Renaissance theatre. Yet more than anything, Prof. Limon is a promoter of Shakespeare’s work. Thanks to Prof. Limon, theatres from all over the world gather in Gdańsk every year in order to present their adaptations of the Bard’s plays. So far, around 200 different theatre companies from more than 30 countries have participated in the Shakespeare Festival, including stagings prepared by theatre directors such as Peter Brook, Luk Perceval, Lev Dodin, or Eimuntas Nekrosius.

Prof. Limon is the originator and director of the Gdańsk Shakespeare Theatre. He was awarded the Officer of the Order of the British Empire in 2014 for his services of popularising Shakespeare’s oeuvre. In 2019, he was presented with the prestigious Pragnell Shakespeare Award.

Where did the idea to create the Gdańsk Shakespeare Theatre come from?

PROF. JERZY LIMON: It originated from tradition: Gdańsk was first visited by English actors at the beginning of the 17th century, and they kept coming for more than half of the century. At that time, it was the largest and wealthiest city on the Baltic coast and a number of its inhabitants came from England and Scotland. From the beginning the actors became very popular. A special wooden building to host theatrical performances was even erected, where the actors performed under conditions very similar to those they had in London.

So we thought that since The Globe had been reconstructed in London, why shouldn’t we revive the tradition of English actors’ visits to Gdańsk and create an educational and artistic centre focused on Shakespeare.

The theatre was preceded by Gdańsk Shakespeare Days.

We brought the first performance from Great Britain in 1993. It was the Oxford State Company’s staging of The Comedy of Errors. The English group also played a pantomime in the Long Market in Gdańsk. It attracted an audience of fifteen to twenty thousand people! Gdańsk Shakespeare Days morphed into the Gdańsk Shakespeare Festival in 1997. But it was not until 2011 that we began to build the theatre. It was a long and tiring process. It goes without saying that the patronage of HRH The Prince of Wales was crucial to the final success, although the funding came from the European Union, the local municipality of Gdańsk and the region of Pomerania.

What is the concept behind the Gdańsk Shakespeare Theatre?

We want to show the diversity of contemporary theatre. That is why we don’t only follow the current trends, but stage both classic and newest, cooler performances.

There are many Shakespeare festivals. Whatmakes the one in Gdańsk so special?

A permanent element of our event are education activities. All performances are combined with lectures, activities for young people, meetings with the authors etc. We have our own independent programme ‘SzekspirOFF’. It shows fringe theatres and various performances.

Is it easy to promote Shakespeare in a country other than the UK?

Paradoxically, it is easier in Poland than in Englishspeaking countries. The Bard’s language is fascinating for experts, but lay people and the young in particular have to struggle with his texts: the language is outdated, plenty of words have become obsolete; there are forgotten proverbs and out-ofdate cultural and political codes. All this renders reception much more difficult. In translations, however – and we do have new translations fairly often in Poland – Shakespeare regains his voice. This modern language brings the work closer rather than introducing more distance.

During the summer holidays, yes. In all other months, it is a normal theatre with a diverse repertoire. We run the ‘Theatres of Europe and the World’ cycle, in which we show performances of groups e.g. from the UK, Romania, Israel or China. Moreover, we show theatres from Poland, we offer educational programmes. The theatre is alive all year round, and is not only about Shakespeare. 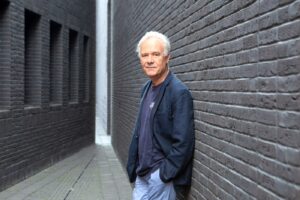 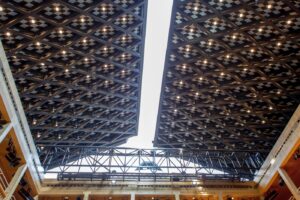 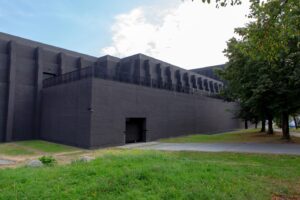 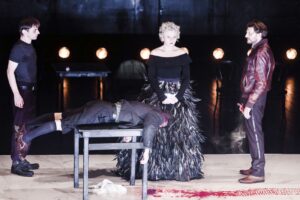