Professor Marek Samoć at Wrocław University of Science and Technology is testing how high power lasers can be used at the interface of biology, chemistry and physics to tackle important social problems.

IF ONE TRIED to describe Professor Marek Samoć’s research interests with one word, that word would be ‘lasers’. Professor Samoć carried out research in Canada and in the United States. He worked at the Laser Physics Centre of the Australian National University in Canberra for 17 years. He decided to return to Poland in 2008. He is currently head of the Advanced Materials Engineering and Modelling Group at Wrocław University of Science and Technology.

The team you are in charge of has become one of the key research centres studying nonlinear optics in the world. What projects do you carry out?

PROF. MAREK SAMOĆ: We work on interdisciplinary projects which require expertise in physics, chemistry, biology and electronic engineering. I always say that gaps in one’s knowledge can be filled, but success also requires enthusiasm and broad horizons. Nowhere have I had students as fantastic as here in Poland.

‘New directions in the study of nonlinear optical phenomena and their physicochemical consequences’. This is the title of your most recent research project. What does this rather hermetic name mean?

The title is indeed hard to understand for anyone other than an expert in the field. I specialize in the applications of high power lasers. High power does not mean that the laser needs to have the dimensions of a huge wardrobe. These are rather lasers which emit light in the form of pulses. The pulses commonly last around 10-13 seconds. By way of comparison, light travels the distance of 300 thousand km in one second. During one pulse, it can only travel 30 microns. Due to its extreme brevity, the pulse is also very intense. The light emitted by such lasers sometimes has a surprisingly strange effect on matter. And these effects are what we call optical properties.

What does it mean that is has a strange effect?

For example, matter, which is normally transparent, becomes opaque or begins to glow when exposed to such short pulses. These are examples of nonlinear optical properties.

Usually, we use a laser that operates in the near-infrared spectral range, that is something we cannot see any more. But if we focus the beam, e.g. with the use of a microscope, on a biological sample, this sample can glow green, red, blue or in other visible colours. The glowing can provide us with a great deal of information, e.g. whether the sample contains pathogens or indicators of the onset of adisease. We proved several years ago that the socalled amyloids, that is protein forms that occur in humans in Alzheimer’s disease, react to laser pulses much more strongly than the native forms of these proteins. This phenomenon can be used to detect and monitor amyloids.

Has the project brought any interesting results yet?

Yes, for instance we have demonstrated that coordination polymers can be used as an optical thermometer and remotely measure the temperature of living tissue with micrometer resolution. This is of crucial importance from the perspective of cancer treatments where the tumour is destroyed by its gradual heating by several degrees. This procedurę has to be carried out with immense precision.

In addition, we are working on drug carriers with several functionalities: e.g. they kill cancer cells and at the same time glow, thus showing the physician where the tumour is located in the body.

Will it ever be possible to apply the results of your studies in practice?

That is our goal. We would like these fantastic tools– lasers – to be used to solve vital social problems, e.g. to diagnose neurodegenerative diseases at an early stage or improve cancer treatment methods. 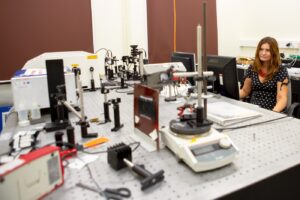 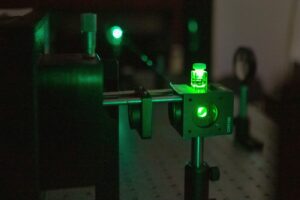 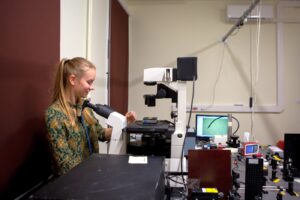 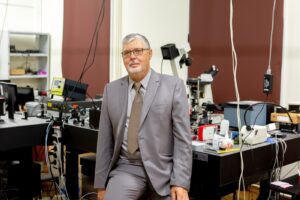