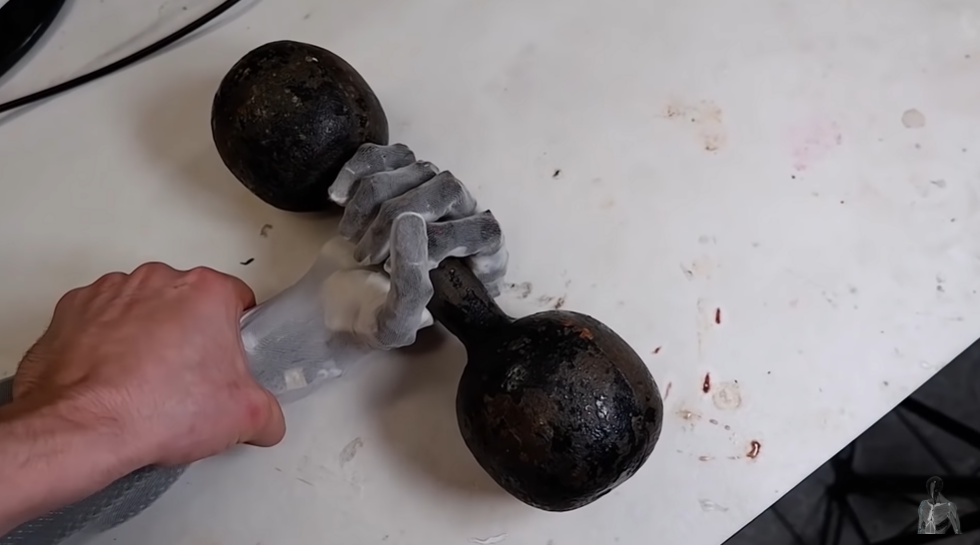 What would you feel when looking at a robot almost entirely based on human anatomy? Excitement, anxiety, fear? If you want to find out, watch a short video by Lucas Kozlik from Wroclaw University of Science and Technology and his colleagues from Clone Incorporated start-up (Automaton Robotics). The presentation of a prototype of a robot’s arm aroused great interest. Its artificial muscles are operated by water and consume 200W at peak. We have gathered more information about this innovative project.

– We have achieved strong, fast, power-dense, high-efficiency, biomimetic, soft, safe, clean, organic and affordable robotic technology. The dumbbell weighs 7 kg (15,6 lbs), the forearm with hand – only 1 kg (2,2 lbs) – state the robot’s designers on a demo video where a robotic arm lifts a dumbbell.[1] The prototype contains only half of the muscles of a real arm, plus it is missing the strongest muscle, responsible for the bending of the fingers.

Experts indicate that the most impressive thing about the robot’s design is the smoothness of its movements. To study human anatomy, Kozlik paid a few visits to a dissection room at Wroclaw Medical University thanks to the courtesy of one of the professors. In the process of creating artificial muscles students used, among others, the technology presented in 1957 by Joseph McKibben in his Air Muscles prototype. Muscles contract when air pressure is applied. Technologies used by engineers give a robot a full range of motion and allow it to lift heavyweight.[2]

A helpful and friendly robot: Golem

The idea that inspired Lucas Kozlik, the founder and now CTO of Automaton Robotics, was quite prosaic – the student did not like cleaning very much. So he decided to build a machine that would replace him (and humanity) in household chores. Kozlik named the robot “Golem”, as a reference to a mythical creature, made of clay, brought to life only to serve people. The makers of Golem add: “Our goal is to create a universal humanoid robot to do your chores. We can achieve this by copying the human anatomy – muscles, tendons and bones”.[3]

The task of creating life-like machines that are friendly to people is happening at Lucas Kozlik’s flat. Lucas and his three colleagues: Dhanush Rad, Amadeusz Swierk and Juliusz Tarnowski are working on a full implementation of the project within Clone Incorporated (Automaton Robotics) start-up.[4]

A humanoid robot to serve people

Golem’s operation is based on the Raspberry Pi system and Python scripts. It uses motion sequencers that allow controlling each finger and joint separately. “The biggest problem we had was with the valves, which were just too big. We managed to reduce them eight times. ” – Golem programmer Juliusz Tarnowski said in an interview.[5] As the designers emphasise, they are also developing a direct nervous interface for communication with prosthesis limbs, that will be able to reproduce all the moves, strength, dexterity and look of the human limbs.[6]

The idea behind creating the robot is far-reaching: “We wish to develop a platform for reinforcement learning purposes, prosthetic arms and ultimately full humanoid robots to serve people for fun, as butlers, cleaners, chauffeurs, construction workers (also in space) and even in the future achieve human immortality by transplanting the brain into the machine” – claim robot’s creators.[7] To realise their plans, the project must be commercialised, which they are fully aware of.