The Birth of Stars 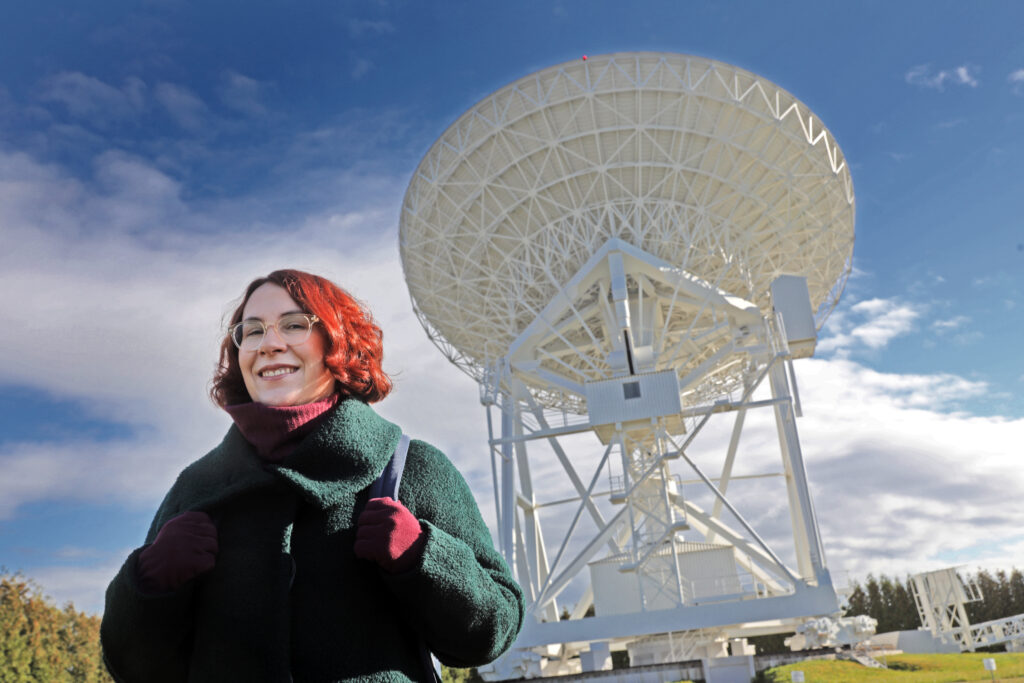 Dr. Agata Karska from the Institute of Astronomy at the Faculty of Physics, Astronomy and Informatics, NCU/Photo by Andrzej Romański, Nicolaus Copernicus University in Toruń

How does ultraviolet radiation influence the process of forming new stars and the entire planetary systems? The topic remained largely unexplored until Dr. Agata Karska from Nicolaus Copernicus University in Toruń and Agnieszka Mirocha, a PhD student working under her supervision, have decided to take a closer look. The results they have achieved can provide more details concerning our origins in space.

Dr. Agata Karska from the Institute of Astronomy at the Faculty of Physics, Astronomy and Informatics, NCU, has focused her scientific interest on UV radiation observed in the vicinity of protostars and its meaning for the formation of new objects as well as planetary systems surrounding them. She is interested in the ways in which low-mass objects such as our Sun are formed. Owing to her contribution to this field of research we will be able to gain more information concerning distant past of our planet Earth.

– Protostars are young, still forming stars. In the future, they will produce energy from the nuclear fusion, and only then they will become “fully-fledged” stars, explains Dr. Agata Karska.

Young stars can be found in clouds composed of dust and gas, impermeable to visible light, which makes observations of such objects quite problematic.

Observations at longer electromagnetic waves, particularly in the far infrared, are necessary because this is where the dust brightness peaks, and also in the sub-millimeter range with key molecular transitions useful for the measurements of the temperature and density of a gas surrounding a protostar, explains Dr. Karska. – Visible light and ultraviolet radiation are completely absorbed by dust. However,  due to observations of rotational lines of molecules in the sub-millimeter range which are within our scope of interest, we are able to determine the temperature and density of the gas as well as the amount of different molecules surrounding a protostar. With such knowledge, we can draw conclusions concerning physical and chemical processes leading to the formation of stars and planets.

By analyzing the presence of water molecules around protostars it was possible to confirm the occurrence of UV radiation in low-mass star-forming regions. Unfortunately, the observations carried out with the use of the Herschel space telescope could not be continued since its mission was accomplished in 2014. Thus, the idea of applying HCN and CN molecules which can be observed from the Earth emerged.

The results of recent research based on observations of these molecules with the use of the IRAM telescope located in Spain can be found in the article entitled “Signatures of UV radiation in low-mass protostars I. Origin of HCN and CN emission in the Serpens Main region” which has just been published in a prestigious “Astronomy & Astrophysics” journal. Agnieszka Mirocha, who studied astronomy at the Jagiellonian University in Cracow, is the first author. She is a former undergraduate and a current PhD student supervised by Dr. Agata Karska who is the second author.

– Our idea was based on taking a closer look at the presence of two molecules, namely, HCN and CN. We considered them as the indicators of where and how intensely UV radiation occurs, says Agnieszka Mirocha, MSc. – There are various molecules presenting different properties in a gas found in a cloud surrounding a protostar. Their abundance in such gas results from the efficiency of chemical reactions leading to their production and destruction, which depend on physical conditions as well as additional processes such as illumination with UV radiation. 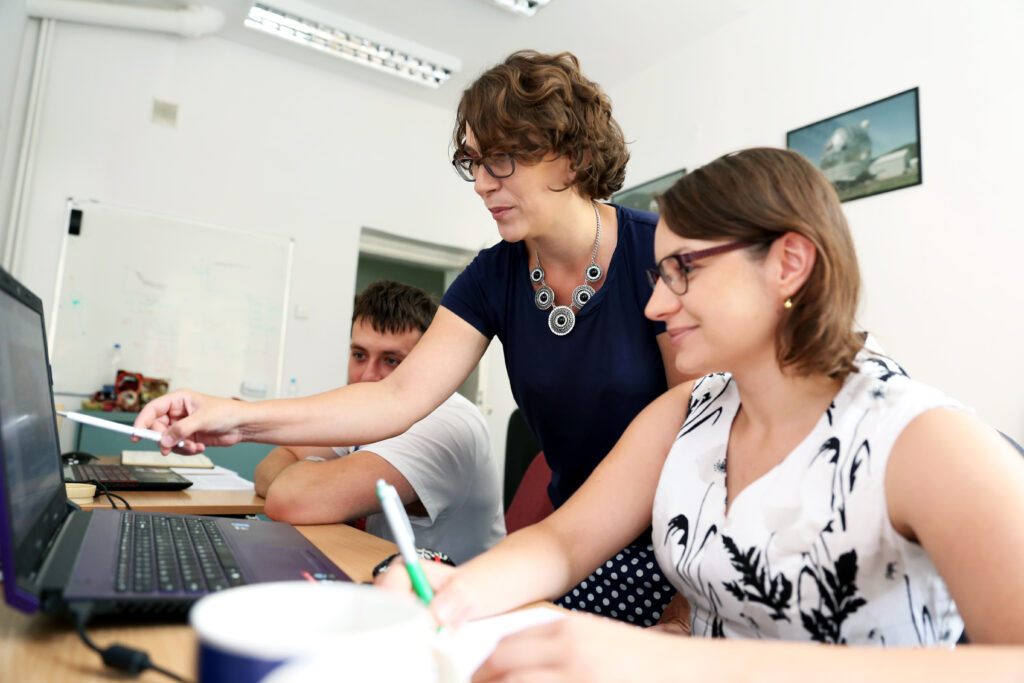 Until recently, astronomers were not certain whether protostars are the source of UV radiation. At present, we know that even though they do not emit it themselves, the matter falling from a disk onto a star not only changes the structure of a shock wave leading to increased compression of a gas but also creates a very hot, illuminated region.

When a dust-gas cloud surrounding a protostar falls in, we deal with accretion which is the agglomeration of matter on a star. Frequently, the so-called accretion shock is observed: a temperature significantly rises in the place where the matter has fallen, explains Dr. Karska. On the other hand, we also know that due to rotation, since the cloud not only falls in but also rotates, in the presence of magnetic field, a certain portion of matter is cast out to space again.

In such a case, we talk about molecular outflow, the outflow of matter and its interaction with the dusty and gaseous envelope. In turn, the collision of the ejected matter with the envelope creates shock waves, in which a sharp rise in temperature and density occurs. Then, UV photons can be produced.

– In our opinion, the outflows we have managed to observe are the primary source of UV radiation, adds Dr. Karska.

– From the purely chemical perspective, the conclusions drawn from the radioastronomical observations could seem surprising: the concentrations of hydrogen cyanide, a very stable compounds, were definitely lower than those of CN, a reactive radical. Under physical conditions typical of the observed objects, such a result could be simply explained by the presence of a substantial number of UV photons, emphasizes another author, Dr. Marcin Gronowski from the Institute of Physical Chemistry at the Polish Academy of Science. 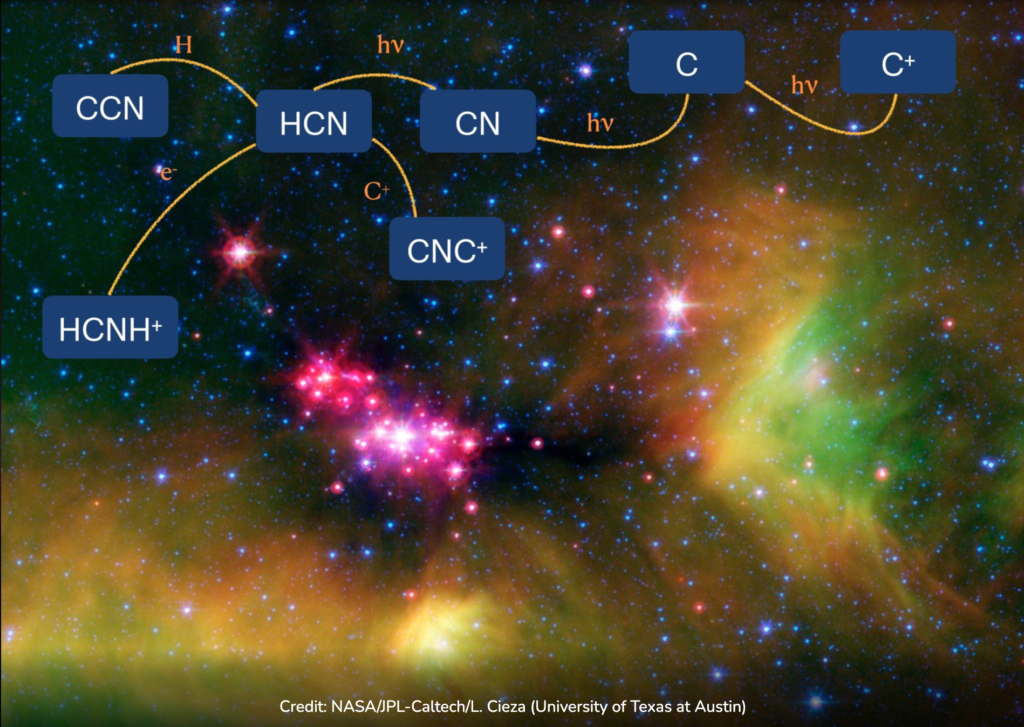 – In our work, we were able to show that HCN and CN molecules are good indicators of UV radiation, says Dr. Karska. – In our research, we demonstrated that the reaction of HCN with a UV photon is its dominant damaging reaction. Simultaneously, CN is more resistant to photodissociation. It means that the photon which damages HCN does not affect CN. In the case of the latter molecule, more energetic UV radiation is required.

While performing our studies, we were fully aware that chemistry of an interstellar medium can be astonishing, says Dr. Gronowski. – We know that about 200 molecules of such kind exist in such media, although there are surely more of them. They can all undergo various reactions resulting in different products. Hence, a complex network of dependencies among concentrations of molecules develops. The chemical complexity level in such media is so high that finding out which chemical processes regulate the CN and HCN concentration was a tedious task.

The power of interdisciplinarity

– While studying the protostellar surroundings and the processes which create UV radiation,  we put much effort to approach the problem not only from the physical viewpoint.  We wanted to consider also chemical modelling of the molecular clouds where young stars are forming, says Dr. Karska. – For modelling we took into account thousands of chemical reactions which can be accompanied by UV radiation of varied intensities. First of all, we checked whether our assumption that the decomposition of HCN caused by radiation yields CN is chemically justified.

It is amazing how interdisciplinary the studies of star-forming processes are. If we want to gain knowledge about the past of the space, we need to take advantage of research in the field of chemical kinetics, spectroscopy, photochemistry, molecular physics, or quantum chemistry, say Dr. Karska and Dr. Gronowski unanimously.