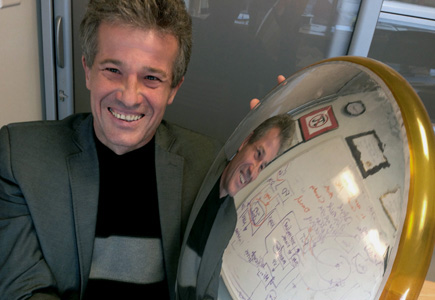 It is not – nomen omen – rocket science if we state that one of the greatest motivations to study and work abroad is following one’s passion. The profile of Dr Artur “Art” B. Chmielewski and his path to become a project manager in charge of space missions at NASA’s Jet Propulsion Laboratory seems to be an excellent inspiration in this regard.

On February 18, 2021, at 21:30, the Perseverance rover lands on Mars “like a kangaroo carrying a tiny helicopter under its belly” – as  Chmielewski describes it. From the very moment of graduation in 1980, he has been working for the centre that built the rover: NASA’s Jet Proportion Laboratory, Pasadena, California. The centre manages uncrewed NASA missions: they do robots. Chmielewski participated in 15 space missions, including Ulysses, Galileo, Cassini, Deep Space 1, Space Technology 6 and 8, TechSat 2, Mars Telecommunication Orbiter, and Rosetta. The role of the project manager of a tennis-court-sized inflatable antenna deployed in space  – this is what he considers his greatest success. Although Chmielewski is not an enthusiast of space movies, he also contributed to pop culture: he was an adviser on the film Armageddon. Also, Matt Damon listened to meetings led by Chmielewski to get to know the professional language and actions.

When asked what links him with the iconic Polish illustrator Henryk Jerzy Chmielewski – “Papcio Chmiel” – Art replies that it’s probably several million genes, as he’s his son. Despite his family’s artistic connotations, he has always been drawn to physics and mathematics. After completing high school in Warsaw, he started to study physics and mechanics at the University of Michigan.

Chmielewski has been passionate about the cosmos, so working at NASA was the obvious choice for him. But getting a job in JRL wasn’t simple, and he was rejected several times. However, due to his persistency (constant applying and arranging meetings with JRL recruiters) and a bit of luck (NASA was planning a vehicle project on Mars, and he specialised in cars), he finally achieved his goal.

He has been working at NASA as a project manager since 1980. It means he is in charge of uncrewed space missions and ensures that a spacecraft will function as promised within budget. Chmielewski puts collective work and cooperation above anything else: at the current stage of science development, individual work does not bring the desired results. As he points out: spacecraft are incredible feats of brilliance by many people across several fields.

What also strongly attracts him about NASA is probably diversity: working with people of different cultures or promoting gender equality. As he claims, everything that’s been easy has been done. Now you have to do hard things, and for hard things, you need creativity.[1] So Chmielewski’s motto is: “throw yourself into a mix of the brightest people you can find, do hard work for the smartest person you know, soak up the wisdom, and before you can say ‘General Purpose Heat Source Radioisotope Thermoelectric Generator’ you too will be radiating wisdom.” [2]

A precious piece of advice

Chmielewski regrets that only several Poles apply for postdocs at NASA. As he claims: foreign students from Poland have it all: knowledge, intelligence and achievements apart from directness, “American” ease and commitment. He stresses that opening up to a different culture and language is essential once you study or conduct your research abroad.