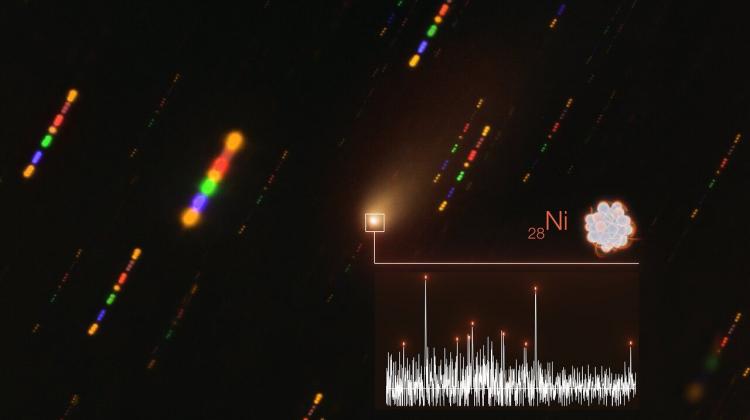 Nickel vapours found within the atmosphere of the icy interstellar comet 2I/Borisov. The finding was made by Piotr Guzik and Michal Drahus, scientists based at the Astronomical Observatory of the Jagiellonian University in Krakow. The 2I/ Borisov’s structure resembles the known compositions of comets within the Solar System. This is an extraordinary discovery because it can shed more light on the formation of the Solar System, as well as prove that objects outside of the Solar System can be similar to those within it. And that’s what Guzik and Drahus find most fascinating about their revelation.[1]

The scientists emphasize that this discovery was pretty unlikely. Solid heavy metals such as nickel are usually found in the rocky interiors of comets. In gaseous form, these substances are more often associated with hot environments, such as the atmosphere of comets passing very close to the Sun.

As Nature points out, comets are remnants of the era of planet formation, and they consist of dust and ice. Observations of these objects are a chance to learn about organic chemistry of young planetary systems. Due to the great distance from the Sun, in most cases the temperature is below a few hundred Kelvins (100 Kelvins = -173.15 degrees Celsius). Even such a low temperature allows the water and other volatile compounds to sublimate (convert directly from a solid to a gas).

The coma nuclei are mostly wrapped by a cloud of gas and dust, called coma. Analyses of the comet composition are based precisely on the observation of the coma. However, in general, coma observations don’t lead to detecting metals – temperatures on comet surfaces are too low for these elements to sublimate.

2I/Borisov comet, being the second known interstellar object in the Solar System, was discovered on 31 August 2019. Observations of this object were carried out at the end of January 2020. Guzik and Drahus used data from the European Southern Observatory’s Very Large Telescope (VLT ESO). The comet was observed at twice the distance from the Earth to the Sun, or about 300 million kilometres from the Sun.

Based on imaging observations, 2I / Borisov appeared to be similar to other known comets observed in the Solar System. This was quite unusual, especially in light of the characteristics of the only interstellar comet known to date – 1I / ‘Oumuamua. This object was discovered in 2017 and was initially classified as a planetoid.

Beyond our planetary system

The scientists needed several tests and checks before confirming that nickel gas was present in cometary atmospheres elsewhere in the galaxy, as it was hard for them to believe that this was even possible. This ground-breaking finding means that comets in the Solar System have their counterparts outside of it. As emphasized by another Nature publication, detailed studies of interstellar bodies are fundamental to science because they contain invaluable information about the alien planetary systems from which they originate, as well as on the formation of our planetary system.[2]

Piotr Guzik and Michal Drahus elaborated on their discovery in an article titled: Gaseous atomic nickel in the coma of interstellar comet 2I / Borisov, published on May 19, 2021.

Picture: The image illustrates the detection of nickel in the atmosphere of the interstellar comet 2I/Borisov. The spectrum of the comet’s light (bottom right) is superimposed on a real image of the comet taken with the VLT in late 2019. Orange dashes represent the nickel lines. Credit: ESO/L. Calçada/O. Hainaut, P. Guzik and M. Drahus. Source: PAP